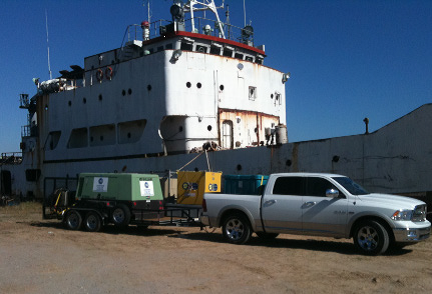 The Motor Yacht Titanic was built in 1971 as a Japanese Government research and fishing vessel. Formerly called Kelso, it is 258 feet long and weighs 2,100 tons. This vessel was recently purchased by a Hollywood movie producer who is having the ship converted into his own private mega-yacht.

When completed, he plans to retire and live on the vessel, taking it out to sea for a month at a time. The owner was drawn to this ship because its hull is ice-rated, meaning it can be safely sailed near the Arctic Ocean and Antarctic Sea. This feature led him to retrofit the yacht, instead of purchasing a new one. The ship is docked in Amelia, Louisiana until the work is completed.

As part of the restoration project, the Titanic’s engine room and equipment is being rebuilt and repainted. The room will ultimately be outfitted with stainless steel trim and backlit with LED lighting, so that when completed, it will be as much of a showpiece as the rest of the boat.

“As far as I know, the engine room has never been cleaned to this extent,” said Dustin Thompson, owner of Louisiana CryoJet. “Forty years of grime and paint is being removed, right down to bare metal.”

In the dark, tight quarters of the Titanic’s engine room are four Niigata diesel engines, a Yanmar generator and a transmission.

Traditional cleaning methods such as sand blasting cannot be used because:

Soda blasting cannot be used due to the caustic nature of soda, which poses a risk to the hydraulic and electrical hoses and electronics nearby. They could potentially be damaged by this abrasive material.

Cleaning the parts by hand with grinders and needle guns is another option, but would likely take a year, and the project has a tight 30-day deadline.

The ship’s owners contacted Louisiana CryoJet because they were familiar with dry ice blasting and thought it might be the perfect solution for this application.

Dry ice blasting uses non-abrasive media in the form of recycled CO2 pellets that won’t damage surfaces or equipment. The combination of dry ice blasting’s kinetic energy and thermal effects break the connection between the dirt and surface, lifting away contaminants. Unlike blasting with other media, dry ice blasting does not leave any secondary waste, because the dry ice particles sublimate upon impact – converting from solid to gas.

Dry ice is safe and non-toxic, does not create downstream contamination, and reduces or eliminates employee exposure to dangerous chemical cleaning agents.

“The dry ice worked great on the engines in this type of environment,” said Thompson. “Dry ice cleaning is the perfect solution when you have sensitive parts, electronics and wiring that will stay in place throughout the project.”

Louisiana CryoJet was able to easily get into the tight spaces of the engine room using the dry ice blasting equipment. They did not need to use containment systems to protect the machinery, adjoining electronics, hydraulic and water lines. By not having to use grinders or needle guns, they did in 30-days what might have taken a year if cleaned by hand.

“By using dry ice cleaning compared to sand blasting, soda blasting or hand grinding, we saved money that would have been spent on man hours and down time on production.”