Clean your BMW with dry ice

In an industry which attempts to strike a balance between cleaning and restoring BMWs, there are many steps to the rejuvenation process. Yet very rarely does anyone consider dry ice cleaning as one of these steps.

According to Eric Keller at Enthusiast Auto Group, the Greater Cincinnati Area’s largest independent BMW service center, oxidation results from a chemical reaction because of substances like road salt that start to eat away at the undercarriage, bolts, hardware, and such, particularly in older cars. Keller works on classic and premium cars, removing topical oxidation.

“We try to be more on the preservationist side of not removing too much, so that it doesn’t look like it’s restored, but yet it’s just very clean and tidy,” said Keller.  “On the heavier corroded cars we’re going to be knocking off some paint and flaking of metal that has started to deteriorate.”

A delicate cleaning technique is needed

Enthusiast Auto Group caters to very particular car enthusiasts who take pride in original and unadulterated cars which look close to new while maintaining that classic model look. When servicing a vehicle, they normally use a hot pressure washer to start out in order to remove most of the buildup. That way, they can see more of the substrate that they’re working with.

As effective as it is for removing dirt, they knew they needed something to really combat the attached debris with more concentrated aggression. However, they knew they couldn’t risk damaging the value of the classic cars by fully restoring them. This required a tool with some variability.

“It depends on the markets, but more likely than not if it looks restored it decreases the value,” said Keller. “The more original the piece, the more valuable it is. A pre-war car is going to be a different market than a 25-year-old Italian sports car.”

The auto group found a method to complete finish and tidy work with a dry ice blasting machine. They compared the technique to a sniper rather than the shotgun approach of pressure washing.

The machine blasts dry ice pellets in order to remove contaminants from precise surfaces, which wouldn’t normally be accessible for cleaning without disassembly. For example, Keller said he cleans red corroded threads of a bolt in-place so that it looks new without his having to even pick up a wrench.

“You can turn it up or turn it down and it goes as deep or as minimally evasive as you want,” he said. “And you get a much better, cleaner finished product. It can go in deeper on a more heavily corroded undercarriage, and it’s going to allow us to remove more of that in not only an economic, but a safe way too. We’re not using a bunch of heavy detergents and scrubbing on it.”

In the classic car market, the more original the car, the more value it carries. The dry ice blasting machine succeeds in making high quality cars that have minimal debris under them look almost new without making them look like they were just restored.

There’s also an appeal to the customer service side of things, because all the little details not only can boost the car’s status from 8/10 to 9/10, but it shows the group’s commitment to putting time and effort into making a vehicle great. 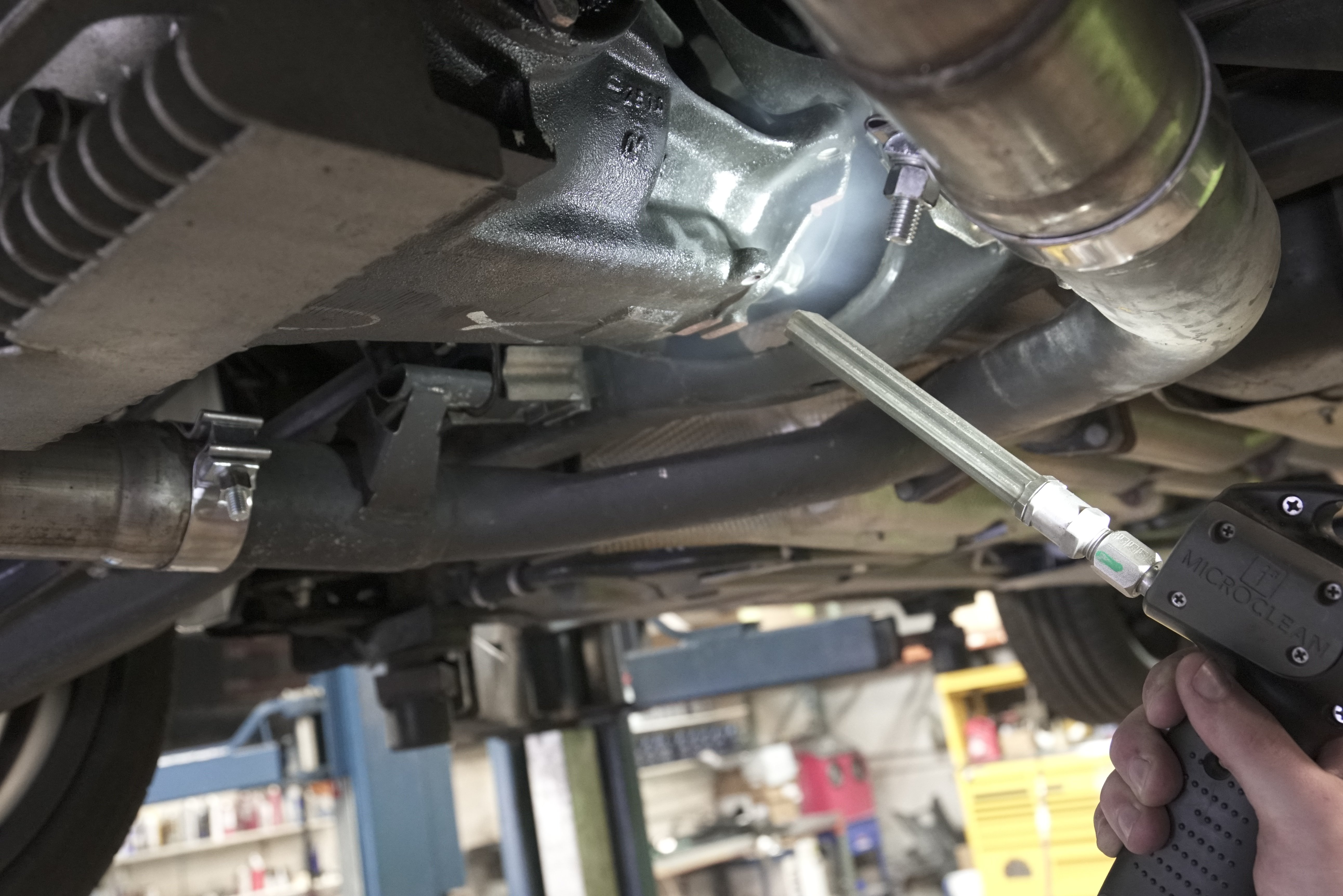 Application of the tool and length of time for cleaning depends on the needs of the individual car, anywhere from 30 minutes to many hours. If it’s already very clean, dry ice can be used to rid the car of the light surface oxidation on the hardware and the untreated alloys so that those look as close to new as possible on the underside when it’s on the storage lift.

On another car with more grit and grime from going up and down gravel roads, Enthusiast’s mechanics will clean it first to get the heavy contaminants off so they can then see the alloy substrate better, then apply dry ice blasting for as many hours as is necessary to rejuvenate the car.

“This is a tool that few places have that will allow a better finished result than what other technologies do,” said Keller.