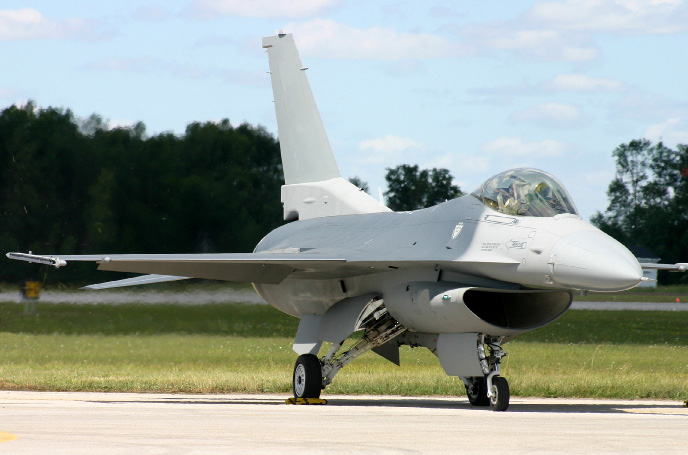 Hill Air Force Base near Ogden, Utah, is home to the Air Force Material Command’s Ogden Air Logistics Complex (OO-ALC). The OO-ALC performs programmed depot maintenance on a number of US Air Force weapon systems, including the F-16 Fighting Falcon.

The F-16 jets are periodically serviced and repainted.  The jets are brought into the shop and sealants need to be removed from the jet’s wings before they are repainted with fuel-resistant paint. To remove sealant from F-16 wings, the 574th Aircraft Maintenance Squadron (AMXS) was manually scraping with abrasive scrapers.

“Scraping an entire F-16 wing takes four shifts and three to four people per shift,” said Dennis Hathaway, F-16 Wing Shop Supervisor. “Scraping sealant by hand is one of the worst jobs for a sheet metal mechanic. It is very labor intensive and can potentially cause carpal tunnel syndrome.”

Cold Jet dry ice cleaning systems use non-abrasive media in the form of recycled CO2 pellets that will not damage surfaces or equipment. The combination of dry ice cleaning’s kinetic energy and thermal effect causes material, such as the sealant, to shrink and lose adhesion from the subsurface, lifting away the sealant. 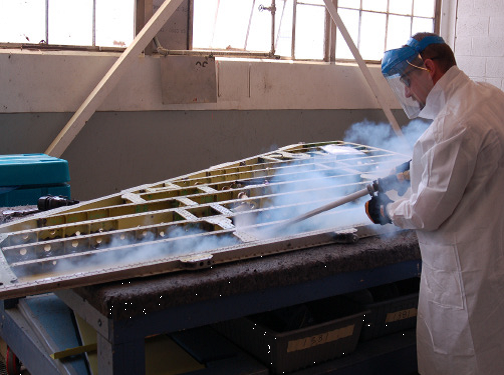 Using the Cold Jet Aero 75, an entire F-16 wing could be blasted in four shifts by only one person. To remove the sealant, the pellets are driven at 1.5 kg - (3.5 lbs) per minute. The machine is capable of operating at 0 to 3.2 kg - (0 to 7lbs) per minute. The dry ice is blasted through a blast swath nozzle using building-supplied air pressure at 5.5 bar (80 psi).

“With the blast pressure adjusted to 3.5 pounds per minute, dry ice pellets remove only the sealant and not the paint,” said Marion Long, 574th AMXS Structures Section Chief. “Using Cold Jet dry ice blasting is so much easier. The sealer is in a dry state, so once it’s removed, it can be swept up and placed in the trash. There‘s no biohazard or bead media to contain, and it’s safe to use on aluminum as thin as 0.0762 cm (30/1000ths of an inch).”

The Air Force base not only found the Cold Jet machine to be more efficient, but also more cost effective.

“In man-hours, the machine was almost paid for after the first use,” said Hathaway. “The shop does six or seven wing skins per year; now all will be done by dry ice blasting instead of scraping.”

The dry ice cleaning process is also much safer for the crew members. The process eliminates the risk of sustaining an injury through strenuous manual scrubbing.

"The shop does six or seven wing skins per year; now all will be done by blast instead of scraping."

"In man-hours, the machine was almost paid for after the first use.”

Dry ice blasting proved revolutionary for the Hill Air Force Base, US Air Force because it: